Dr Tanya Latty, Research and Teaching Fellow in Entomology, The University of Sydney

Our society depends on the hard work of insect pollinators to ensure a diverse – and delicious – supply of fruit and vegetables. Much of the food on display at the shops requires some degree of insect pollination in order to produce high-quality fruit. These include favourites such as melons, apples, blueberries, mangoes, avocadoes and even chocolate.

Increasing public awareness about the indispensable work of our insect pollinators has led to concern for the health of global populations. An increasing number of scientists are reporting disturbing declines of bees, butterflies and other insects. Amid cries of ‘save the bees’, the familiar yellow and black honeybee has become the beloved public mascot for pollinator protection.

But there’s a problem. While most of our attention has been focused on honeybees, we have virtually ignored the health and conservation of Australia’s astonishing array of native pollinators. We do so at our peril.

Australia has more than 1700 species of native bees, some of which are found nowhere else in the world. They are incredibly diverse and come in a rainbow of colours from the iconic blue-banded bee commonly seen in urban gardens, to the spectacular metallic green carpenter bee. Our tiniest native bee (and possibly the smallest in the world), is the quasihesma bee which is tiny enough to sit comfortably on the head of our largest species, the great carpenter bee.

The majority of our native bees live a solitary life, with a single female taking on the job of raising her offspring alone. Some species, like blue banded bees and Dawson’s burrowing bees, nest in large aggregations, although they do not cooperate in child-rearing. Instead, each female builds her own nest and looks after her own young.

Our 11 types of stingless bees are the most social of our native species, living in colonies with thousands of their siblings. Stingless bee workers – who are all female – cooperate to raise the young produced by their mother, the queen.

Honeybees are not the only ones that can pollinate our crops. Plants like tomatoes and eggplants have tightly packed pollen that can only be freed when vibrated at exactly the right frequency. It’s like a lock that can only be opened by bees who provide the correct vibratory key. Honeybees are unable to deliver the acceptable buzz, so are poor pollinators for these crops. Several of our native groups like carpenter bees, blue-banded bees and teddy bear bees are excellent buzz pollinators.

One of the advantages of using honeybees as pollinators is the fact that they live in large colonies; a single hive instantly provides thousands of hard-working pollinators. Stingless bees also live in colonies and so have excellent potential as an alternative to honeybees. A small but growing stingless bee industry has pioneered techniques for keeping several species of stingless bees in hive boxes. This allows colonies to be deployed into crops as pollinators.

Stingless bees can effectively pollinate a range of crops including blueberry, mango and macadamia. As their name suggests, stingless bees don’t have a stinger which makes them ideal for smaller spaces or high traffic areas like urban farms, community gardens and market gardens or for enclosed zones like greenhouses.

Native pollinators as a Plan Bee

Most commercial pollination in Australia is done by honeybees. But this over-reliance on a single species can lead to problems if honeybee populations decline. Australia is currently the only inhabited continent that does not have the varroa mite, a small spider-like insect that infests bees and transmits several devastating bee diseases. Many bee scientists believe it is only a matter of time before the dreaded varroa arrives on Australian shores.

The eventual appearance of varroa in Australia could cause the cost of hiring bee colonies to rise as it becomes harder – and more expensive – for beekeepers to ensure their honeybees stay healthy. At the same time, the free pollination services provided by wild honeybees will likely disappear as unmanaged colonies succumb to the mite and its associated diseases.

Our native pollinators provide an important insurance policy against the decline of honeybees. Native bees are unlikely to be impacted by varroa which has adapted specifically to honeybees’ lifecycle and colony structure. Encouraging a diverse array of native pollinators is a simple way to safeguard our pollination-dependent crops.

Australian stingless bees produce a deliciously tangy honey known as ‘sugarbag honey’. This sweet treat has been harvested by Indigenous Australians for millennia and is a tasty bush tucker food.

Unfortunately, stingless bees don’t produce as much honey as honeybees. Extracting the honey from the nest is also a more laborious process, since the honey is stored in tiny wax pots. For these reasons, stingless bee honey is generally difficult to find commercially – unless you are lucky enough to be on good terms with a local keeper or enthusiast.

Australian native bees are an important part of our natural heritage and protecting them should be a priority. As a bee scientist, one of the most frequent questions I am asked is: Are Australia’s bees in trouble? The sobering answer: we don’t know. Detecting insect declines requires long-term monitoring and this simply doesn’t exist for the vast majority of Australia’s pollinators.

Since the most likely causes of insect declines are habitat loss (for example, through land clearing) and incorrect and overuse of insecticides – both of which are an issue in Australia – it’s reasonable to be concerned about the health of our pollinating insects.

What can we do to ensure that our beautiful native bees continue to thrive? Perhaps the simplest thing is to plant flowers. Bees need both pollen and nectar in order to survive and thrive. Some bee species will happily feed on a large variety of flowers while others are much pickier and will only visit a few native plant species. The best approach is to cater for a range of tastes by planting a variety of native and non-native flowering plants. Aim to have something in flower all year round, since some pollinating insects are active even in the winter.

Not sure which plants to choose? There are plenty of online resources for choosing bee-friendly flowers. Unfortunately, not much is known about the specific preferences and nutritional requirements of native bees, so perhaps the best strategy is to let the bees tell you what they want. Try visiting an outdoor nursery or garden centre and look for flowers that are abuzz with bees. Observe which flowers in your area tend to have lots of native bees on them. Planting for bees is a trial-and error process, but it can be highly rewarding.

Second, avoid using insecticides, especially on or near flowering plants. Organic insecticides are not necessarily safe for bees, so do your research before selecting an insecticide. Ideally, steer clear of broad-spectrum insecticides which will kill all insects, including bees.

Ultimately, protecting our bees requires us to be more thoughtful about how we live and how we farm. Ensuring that there are flowers both in urban and agricultural environments is crucial to bee survival, as is reducing our dependence on insecticides. We need to preserve our remaining wild spaces since not all of our native bees thrive in urban or agricultural environments.

Pollinating insects are the glue that holds many ecosystems together. Without them, we stand to lose a lot more than just honey. 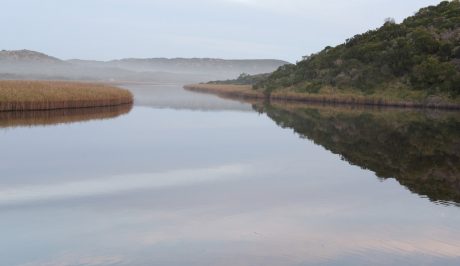 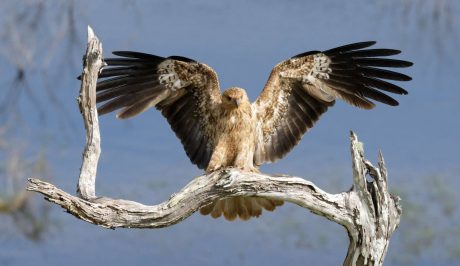 A whistling kite lands on a dead branch.

Flight of fancy – Discover the joys of birdwatching